“A jabberwocky?” The sergeant’s eyes squinted with a hint of disbelief. “Are you sure?”

“Yes, sir. Down by the creek early this morning. Stew and I were just leaving from a night of catfishin’ and … and there it was…. plain a day.”

“Yes, sir. At least ten feet long and spikes all it its spine. And the awefulist hissin’ noises I ever did hear.”

“Did your fishin’ mate see it? Why isn’t he with you?”

“He shoulda seen it, but it disappeared in the brush right before my eyes.”

“So where is he?” The Sargent had that all-knowing look in his eye.

“He went home to sleep.”

“To sleep it off? A little too much nipping in the night?”

“Yes, sir. I mean, no, sir. The beast was real. I could’a reached out and touched him. Maybe even captured him, If’n I’d a mind to.”

“Now that would have made a lasting memory,” smiled the Sargent. 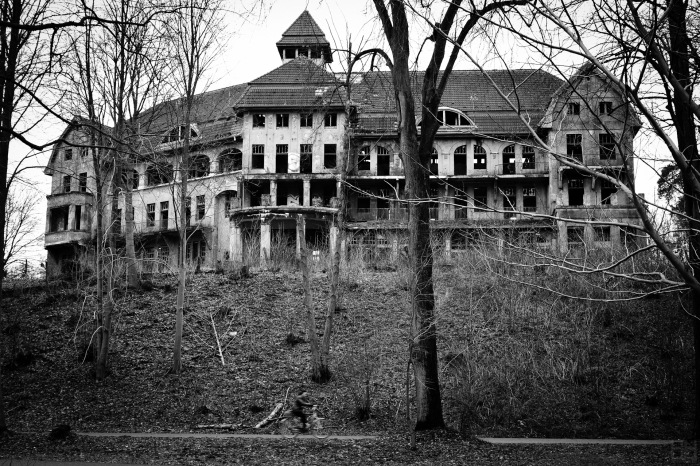 “But we agreed,” I responded in desperation. Another year of enforced dorm-life would be unbearable.

“I’m going to chicken out.”

“Good. It’s the last thing on the list and we’ll be full-pledges.”

Little did they know, much more was promised by this night of gloom than mere pledge-vow fulfillment.

The dazzling lights blinded Emma as she stepped onto the stage.

Her first performance of an original piece.

Her father had lived for this day from her first practice.

She was far more reluctant. Her music shared intimacies that she was unsure she wanted to make public.

The audience erupted … a standing ovation.

“Utterly ridiculous,” she thought. “I have yet to become who I am.”

The flimsiness of their accolades meant little to her.

Yet there … front and center… there sat her dad.

Confidently, she sat at the newly-tuned Bösendorfer.

And heaven filled the air.

Pop sat back in his enormous red leather chair and breathed a sigh of release.

Mother was still in the kitchen putting away the last of the washed pans. The girls were turning down the beds. The older of the two boys was completing the last check on the penned animals. The youngest had already been tucked in by the nanny.

The next ten minutes was his most cherished time of his day.

Reaching across the glazed mahogany table, he grasped his small walnut embossed humidor. Opening it, he breathed deeply. The most fragrant smells in the world were released for him personal pleasure.

Bypassing the rich temptations of the row Brazilian-leaf Escurio and Bijou Torpedoes, he fumbled into the lower tray for something far more unpretentiously specific… the old standbys… his robust, rum Swisher Sweets. They had been the cigar of choice for his father, his father’s farther, and the grandfather before him.

The freshly-lit aroma of a Sweet rekindled memories of bygone years.

Footsteps were pitter-pattering down the side stairs.

Quickly snuffing out the heaven-sent cane… he stood to give the much awaited bear-hugs to the twins.

He was a gentleman from the old world… he would never smoke- or even be caught smoking-  in front of the girls.

He would have time for his Sweet later.

Maybe it was time for Sabastian, his oldest, to join him. He was about Sabastian’s age when he had his first Sweet.

With a kiss to the forehead of each of the twins, he relaxed and waited for Sabastian to report in. 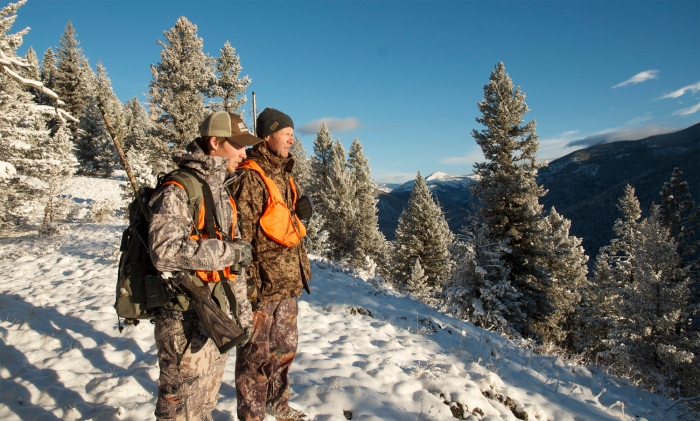 Halting at the fence, I handed my rifle to Eb, crossed over, took my rifle and his, and waited for Eb to cross over.

I had promised the family (our three boys- not the wives) moose steaks for Thanksgiving. Before you go ga-ga that is not a far-fetched meal plan! Montana has had a growing herd of elk for the last seven season. Eb and I have seen three or four in the upper range every weekend this fall. We weren’t after a trophy, just a meal a little more gamy than the tofu turkey that the wives have settled on since their three month excursion into vegetarianism.

Snowfall had been erratic since early morning. A quick radio check from NOAA calculated that we had a good five hours before anything of slightly dire consequence would be on the roads.

The austere, yet pristine mountain range before us had Eb bouncy with excitement. His normally vapid, white-collar-accountant’s lifestyle tendencies were becoming unhinged by the majestic views and the primal opportunity of his first kill.

I had to continually remind him that silence was necessary for a successful hunt, even if all wind and weather factors and availability of a kill were in our favor.

We hiked for seventeen mostly-hushed miles, the snow continually deepening. I had planned ahead, I had attached snowshoes on each of our packs… even though this was a symbolic awakening into a hunting family for Eb, this was not my first rodeo.

Upon shoeing ourselves at mile fourteen or fifteen, Eb’s silence became more strained. His taciturnity was not from the excitement of discussions involving the kill, Eb was 5’7” and 217… The mammoth mountains were beginning to overwhelm the massive Eb.

At noon, Eb succumbed to defeat. Even if we, by happenstance, fell upon an elk, he did not have the strength remaining to help field dress and drag the animal home.

Never one to face failure head on and retreat, I shouldered the two rifles and handed Eb the Ruger 22 LR.

As we carefully re-crossed the fence, I walked the rifles to the Rover and then assisted Eb to our permanent deer-stand in the adjoining field.

The weather had not been early as blustery here in the valley. From the benches in the stand, we could overlook a shallow stand of oaks.

Within twenty minute we had seven squirrel.

While not elk steak… scrambled eggs, buttered toast, and fried squirrel for morning breakfast… not a bad day from the offices.

He was a kind old man, my grandfather. You could see the love and compassion flowing from his eyes.

As I got out of the taxi, with only two garbage bags of belongings, he grabbed both of my shoulders… held me at arm’s length… and said “I see your momma in you.”

Before I could answer, the taxi had driven off and I was there… alone.

I could sense he knew how frightened I must have felt on the inside.

He turned and I could barely hear him as he said, “This is your home now. You’ll be sleeping in your mother’s old room.”

He just left me standing there. I think he knew that I had to find the courage to make the first steps toward a new home on my own… or I wouldn’t want to stay. It had to be my decision.

I thought of all the melodramatic feelings that were embattling in my mind… maybe even in my heart.

Momma was gone. We’d laid her to rest that afternoon. Dad… who knows.

This lighthearted, elderly man… this was all that was left of family.

I picked up my traveling luggage and boldly yelled… for he was already up the lane and to the side door of the house… “Grandpa… I’m hungry! What’s for supper?”

When he turned his face, I know I saw him smile. I think his face was a wet as mine.

Written for Three Word Wednesday: Week #499. Requirements: Use the three given words in a story. This week’s words are…

With a look of stern consternation, Margaret stared at the bowls as she carefully winnowed the weevils from the grains.

Having finished the bowl in its entirety, she tactfully, and unobtrusively, tossed the pests upon the open flames.

With a pop and a sear, they was vanquished.

Evelyn turned a blind eye to the reprehensible sounds.

Margaret had been with her since before she had married Winston. Now, with the passing of Winston, and the asperity brought on by the horrific collections revealed in his death, Margaret was all that truly remained as her fortress.

Unabashed, Evelyn joined Margaret at the ovens. The first loaves were needing to be removed from the fires and greased.

As teens, on a whim, the girls had become renown in their small town as exquisite bakers.

Necessity was requiring them to renew their once frivolous undertakings for survival.

After seven dud dates in a row, I had changed my profile. How was I to know that spontaneous and friendly were code for easy?

Walter has passed three years, and I was new. I was not even sure if I was ready for another relationship. But girls in a secretarial pool are a force with which to be reckoned. Over drinks at our last party, they had coerced me into creating a dating profile.

Of course I was tentative about it. But to be able to know so much about someone before you even go out with them… What could possibly go wrong?

Talk about being naive!

I had learned my lesson. I scoured the classified to find the most unappealing, unattractive, unlikely prospect-for-a-mate as I could possibly find.

At least, now I would not be disappointed.

Strange, I was far more excited about this date than any of the others.

I wonder if he will mind that I am not twenty-seven and blonde.

PRIDE GOES BEFORE A FALL

I am usually a very placid person … except for the things that I am passionate about: Learning new things… Watching ‘light bulbs’ come on in the heads of my students… Overtime victories or defeats in sports that I love… Great music… (Maybe I really am not that placid?)

With that being said, let me explain a terribly, troubling disappointment that has just happened… Horrifying, to me, actually… At a time that I should have been rejoicing!

I have just installed “Flags of the World” … a widget on my blog to keep track of the countries where my blog has been read. (This is a big step for me… I am not much of a computer geek… And it usually takes three or four tries for anything to work successfully in the geek world.)

I will very truthfully admit… I have experienced great thrills at watching the total of the countries that have read my blog climb for ten… to fifty… to ninety-four!!!

If successful, victorious fervor resonates in your heart as you read this as did mine at the last count… you, too, will be able to feel compassion for me.

An ‘obituary’ suddenly appeared on my loving blog. I felt an arrow pierce my heart…

My keyboard is still wet from the tears.

Well, if one has to start over… a new year is a good place to start.

Written for 3WW Week No. 457. Requirements: Use the three required words in a story.

Obituary, noun: a notice of a death, especially in a newspaper, typically including a brief biography of the deceased person.

Placid, adjective: (of a person or animal) not easily upset or excited; (especially of a place or stretch of water) calm and peaceful, with little movement or activity.

Resonant, adjective: (of sound) deep, clear, and continuing to sound or ring; (resonant with) (of a place) filled or resounding with (a sound); having the ability to evoke or suggest enduring images, memories, or emotions; (of a room, a musical instrument, or a hollow body) tending to reinforce or prolong sounds, especially by synchronous vibration; (of a color) enhancing or enriching another color or colors by contrast.